The final result of the US mid-term elections is still uncertain, but some trends are already visible. In this Macro Flash Note, GianLuigi Mandruzzato looks at the key conclusions for the economy and the markets.

The result of the mid-term elections is more uncertain than expected and the counting of votes will not be completed for several days, perhaps weeks. However, some key elements are clearly emerging that will have an impact on the economy and markets in the coming quarters.

The first element is that there was no “red wave”. While the polls suggested that the Republicans would comfortably regain control of both the Senate and the House of Representatives, it now looks like the Republican advantage in the House will be smaller than expected and the outcome for the Senate hangs in the balance, with a real possibility of 50 seats each.

The worse-than-expected performance of Republicans seems to be attributable in particular to candidates closest to Trump. This is an important signal in view of the former President’s well-known ambitions to stand as Republican candidate in the 2024 elections. Voter concern about the Democrats’ handling of the economy and high inflation has been largely offset by concerns about civil rights, including abortion. The mobilisation of the electoral base seems to have led the Democrats to the best mid-term performance of a party in power in the last 20 years, when the incumbent has historically lost support.

Although with a smaller margin than expected, the Republicans will control at least one of the two chambers of Congress and will thus be able to block proposals of the Biden administration. Therefore, it is very unlikely that spending increases will be approved before the next presidential election despite the growing risk of recession.

At the same time, Republicans will be able to block proposals for tax increases despite the increase in public debt. The result will be a rather neutral, and perhaps marginally more restrictive, fiscal policy. If the Republican Party does not support growth, it will, however, have the advantage of encouraging a more rapid decline in inflation. Monetary policy may therefore be less restrictive than currently expected, also because the Federal Reserve could find itself the only public body able to act in support of the economy.

There is a risk that the situation degenerates when debt limit discussions take place in 2023. The 2011 stalemate might be repeated, culminating in a prolonged government shutdown.

In addition, Republicans will be able to block progress on matters dear to Democrats such as greater regulation of key sectors, including the financial, energy and health care sectors. Furthermore, it is possible that military support for Ukraine will become the subject of a more heated debate.

Finally, it is also important who will control the Senate for the appointment of the judges of the Supreme Court and other executives of the public administration. If the Democrats retain control of the Senate, they will be able to approve Biden’s appointees. Furthermore, by controlling the Senate, the Democrats would be able to stop any attempt to impeach President Biden.

On financial markets, we think the probable new structure of the US Congress could favour a less aggressive monetary policy to the advantage of the stock market, which will also benefit from the lower uncertainty linked to regulation. The stock market outlook is also supported by historical evidence that corrections recorded during mid-term election years are followed by vigorous recoveries (see Table 1). 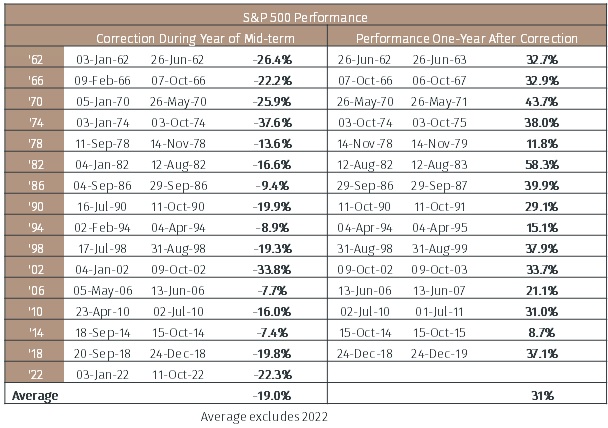 The bond market should benefit from lower growth and inflation expectations. Finally, after the strong appreciation of the last few months that has led it to its highest level in 20 years, the US dollar could lose ground, especially if, as in 2011, there is a government shutdown.

The 4th edition of ‘Caminada. Das Magazin’ hits the shelves today, Friday 18 November 2022. The new edition blends the latest food trends with some cultural inspiration from across Europe, as well featuring exclusive interviews and the latest influences in design and lifestyle.

The price of diesel has soared since the invasion of Ukraine, diverging from other petroleum products. While the markets are confident that the recent drop in oil prices will help lower inflation, the high price of diesel is slowing this process. GianLuigi Mandruzzato looks at the price drivers of diesel and its impact on the prices of other goods and services.

A welcome to the 30th EFG London Jazz Festival

To mark the opening of the 30th EFG London Jazz Festival on Friday, 11 November 2022, Richard AA Thomas MBE, CEO, EFG Private Bank Limited shares his thoughts on reaching such an epic milestone and gives us an insight into what we can expect from this year’s very special programme.