The driving factor behind this decision is that the increase in US inflation that started in the spring of 2021 has been much stronger, more persistent and more broad-based than the Fed and most other forecasters had predicted.

To illustrate that, the figure below shows the projections for end-2022 of PCE inflation and the federal funds rate of the median member of the Federal Open Market Committee (FOMC) that sets interest rates.1 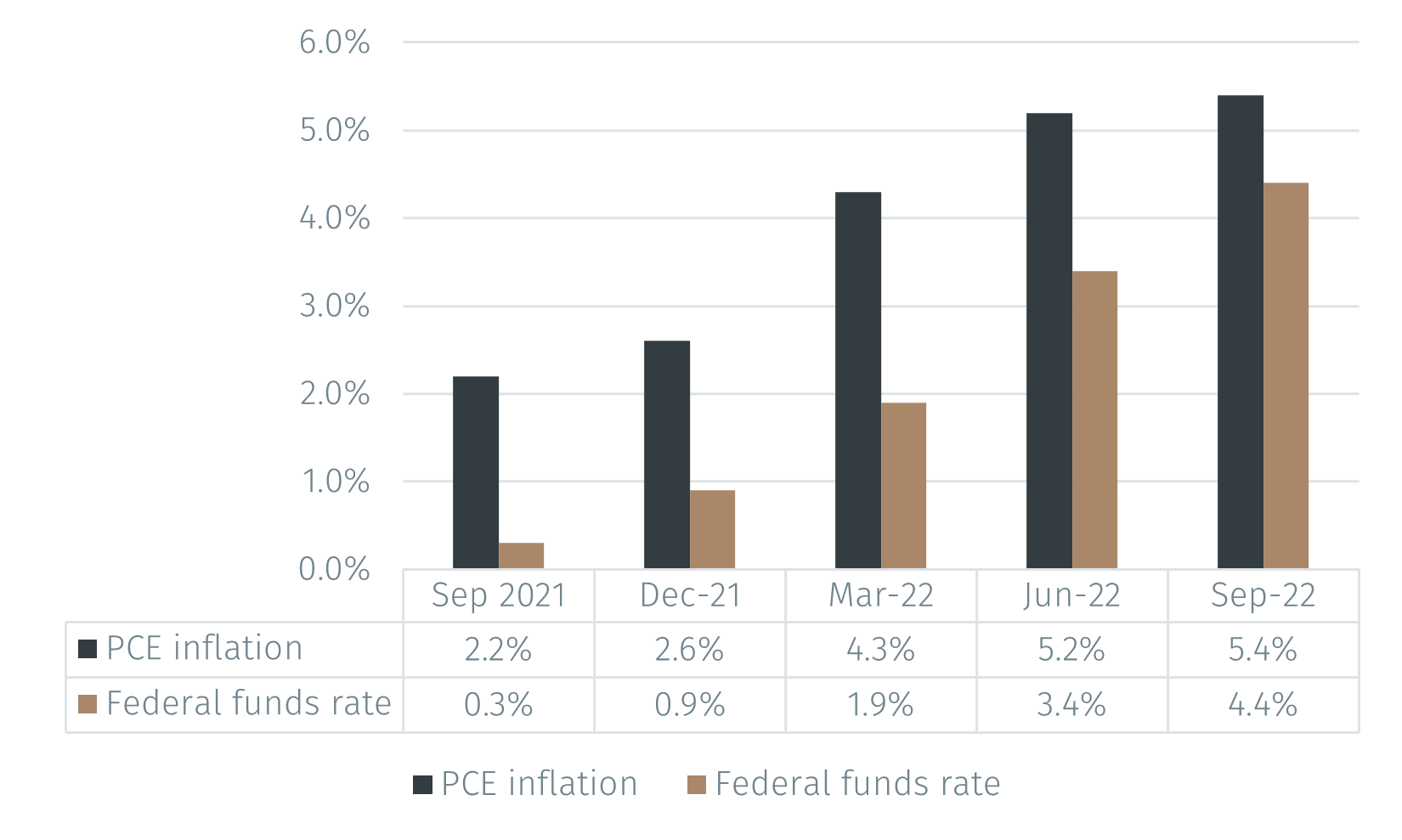 In commenting on the decision, Chairman Powell emphasised that the economy has slowed from the historically high growth rates of 2021, which reflected the reopening of the economy following the pandemic recession. He noted that recent data suggested modest growth of capital spending and production, that growth in consumer spending has slowed, and that the housing sector has weakened significantly, reflecting higher mortgage rates. Tighter monetary policy and lower growth also appear to be affecting business fixed investment and lower growth abroad is holding back export growth.

The outlook for the US economy as captured by the median projection of the members of the FOMC shows how the Fed expects the economy to evolve. The projections are available for the years 2022-2025 and for the “longer run.”2 Looking at how these projections change from one meeting to the next makes it possible to assess the extent to which the Fed has been surprised by economic developments.

The graph below shows that the Fed has not changed its outlook for PCE inflation materially. It will be about 5-5.5% this year, fall below 3% next year, below 2.5% in 2024 and settle at 2% in the longer run.3 Thus, the Fed is still expecting the surge in inflation to be short lived, but of course longer lasting than it expected a year ago. 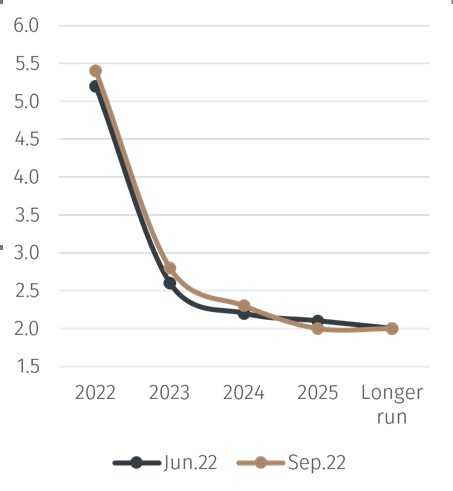 Turning to real GDP growth, the chart below shows that the median FOMC member’s projections for 2022 and, less so, for 2023 and 2024 have been lowered sharply. 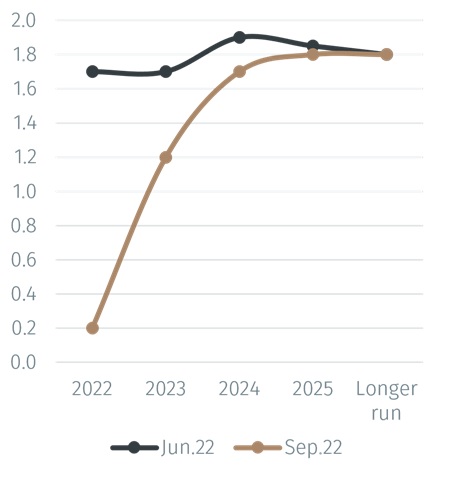 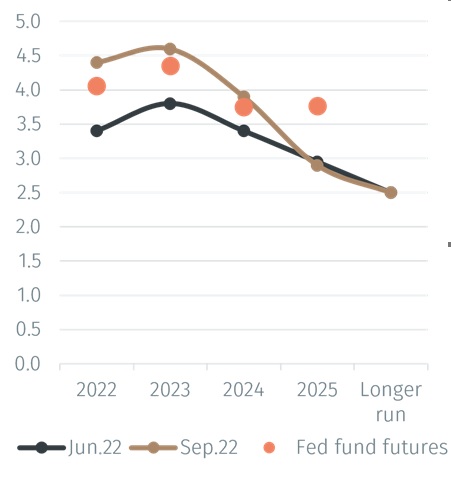 Source: Federal Reserve Board and CME, data as 21 September 2022.

Overall, the median projection shows that the Fed believes that US inflation is close to a peak and will decline over the next few quarters. The surprisingly strong and persistent increase in inflation has required the Fed to increase interest rates sequentially and revise upwards the level at which interest rates are expected to peak. The subsequent tightening of financing conditions is weighing on real GDP growth and unemployment. The question markets will seek to answer is if this is enough to return inflation to the Fed’s target.

1 See http://go.pardot.com/e/931253/olicy-fomcprojtabl20220921-htm/29scg/103244008?h=C6GvxMzW_RKNTqEbiBR7bF9FGIqPwWm_yhHFz2PLKNU
2 The inflation and growth rates are measured by the change from the fourth quarter of the year before to the fourth quarter of the year in question. Projections for the unemployment rate are for the average civilian unemployment rate in the fourth quarter of the year indicated. Longer-run projections represent an assessment of the rate to which each variable would be expected to converge under appropriate monetary policy and in the absence of further shocks to the economy. The projections for the federal funds rate are the value of the midpoint of the projected appropriate target range for the federal funds rate or the projected appropriate target level for the federal funds rate at the end of the specified calendar year or over the longer run.
3 At the time of the June projections participants were not asked about their views for 2025; the graph shows the mean of the answer for 2024 and the “longer run.”
4 The dots are for the month of December.

The collapse of Russian GDP shows that Western sanctions are effective. Despite improved GDP estimates, the economic outlook is poor. In this Macro Flash Note, GianLuigi Mandruzzato reviews the consequences of the war on the Russian economy.