The equity market is clearing its sinuses

The equity market is clearing its sinuses

The S&P500 index of large cap US equities more than doubled between the March 2020 lows and the end of 2021. It was up by over 25% last year alone, by about 50% in the three years to end 2021 and by more than 350% over ten years, a compounded annual rate of growth of about 16.5%. This is a remarkable track record and reflective of general strength across global equity markets. In this context it is not surprising that many equity markets have experienced a pullback over recent days. Increased market jitters have been associated in particular with expectations that the Fed will soon start to hike rates and shrink its balance sheet. Negative sentiment has been additionally fuelled by concerns about the Omicron Covid variant and geopolitical tensions between Russia, the US and the European Union concerning Ukraine. In this Macro Flash Note, Daniel Murray assesses the market outlook against this background.

The phenomenal equity market performance since the pandemic-induced lows has been accompanied by concerns about valuations, rising inflation and slowing economic growth. It was therefore expected that at some point the equity market would pause for breath and that is what has happened over the past few days. It is certainly true that on some backward-looking measures, valuations looked a little extended as we entered the New Year. However, this partly reflected the good outlook for company earnings and the lack of alternatives in an environment in which interest rates are close to zero. 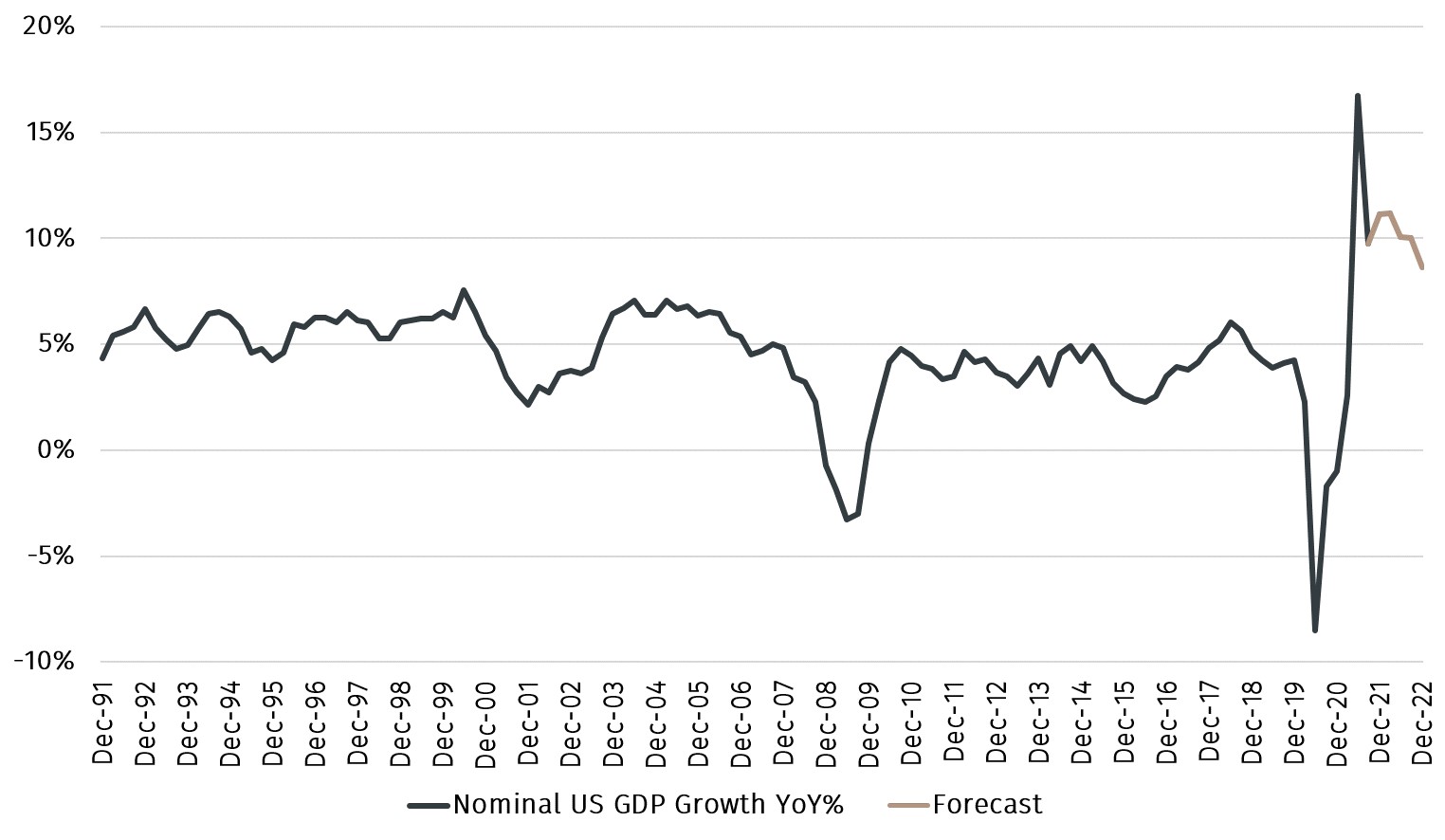 Whilst rising inflation brings with it the prospect of tighter monetary policy, it is also a reflection of stronger pricing power, something that has been largely absent for many businesses over the past decade or so. Furthermore, economic growth is expected to remain above trend in most countries for at least this year and probably also next. The combination of stronger pricing power and robust growth is reflected in a buoyant outlook for nominal GDP and that tends to be good for corporate profitability.

It is normal for implied volatility to rise during periods when negative investor sentiment spikes – the two may even be considered synonymous. Similarly, there are other market signals that are typical during periods of heightened market sensitivity including a rally in perceived safe-haven currencies such as the yen and the Swiss franc. That is exactly what we have witnessed over the past few days. The recent increase in implied volatility to more than double its long-term average is therefore a reassuring sign that what we are seeing - in the short term at least - is associated with classic market panic behaviour rather than a shift in the underlying fundamentals.

Chart 2. The US Unemployment Rate and the VIX index of Implied Volatility 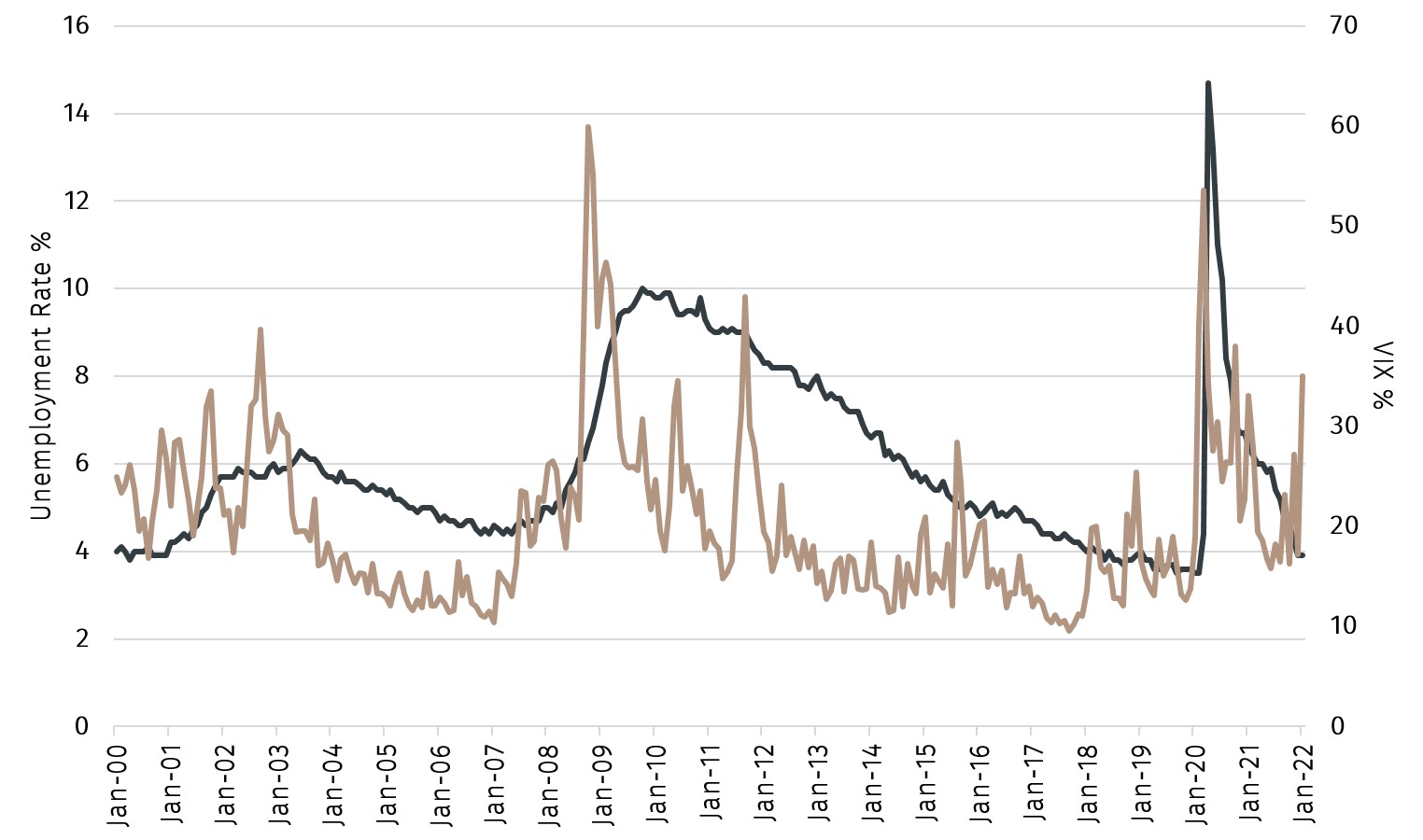 Confidence in this view is further bolstered by noting that more prolonged periods of elevated implied volatility have historically been associated with a sharp rise in the unemployment rate, reflecting in turn stress in the corporate sector and a rapid deterioration in economic conditions. With labour market shortages well documented and continued signs of ongoing labour market improvement, such a situation seems unlikely for the time being.

In terms of the broader economic outlook that too appears to be in good shape. Short term indicators - such as PMIs - have levelled off recently but generally remain firmly in the expansion zone. Furthermore, the yield curve slope is positive and that is a strong signal of continued economic growth over the next year or so. In terms of sequencing, a crude way to think about the order in which events typically occur is (i) the yield curve slope turns negative (ii) around 6 – 12 months later equity markets start to price an increased likelihood of economic slowdown and volatility picks up (iii) around another 6-12 months after that meaningful economic slowdown or contraction occurs.

To be clear, this is not a precise science and there are a lot of variables that influence markets. However, as a simple heuristic for helping us distinguish between market sell-offs that are part of the normal ebb and flow of investor sentiment versus a more sinister decline in the fundamentals, this type of analysis has proven useful in the past.

As noted above, the Fed has signalled that it will likely hike rates and end its asset purchase programme more rapidly than it had indicated earlier in 2021. However, monetary policy works with a lag such that the measures implemented this year will continue to take effect over at least the next 6 – 12 months. Furthermore, it is important to recognise that the Fed will most likely continue to add to the size of its balance sheet for a few more months while other major central banks such as the ECB and the Bank of Japan have said they will continue their asset purchase programmes for the time being. In addition, the Chinese Central Bank is engaging in easing policies to stave off the impacts of Omicron and challenges in the real estate market.

History suggests that markets can take a few months to digest a shift in monetary policy but that 6-12 months out markets have been higher on eight out of nine previous occasions, as shown in Table 1.

The policy picture is therefore generally supportive of a healthy economic environment. Whilst it is true that inflation has remained higher for longer than most central banks were anticipating a few months ago, the situation appears to be mainly supply-side driven for which monetary policy is a relatively ineffective antidote. As base effects wash out during the year and supply side constraints loosen, so the inflationary impulse is expected to reduce, taking the pressure off central banks.

Geopolitical events often make us feel uncomfortable because they create a huge amount of uncertainty and there is the potential for a tragic loss of human life or an increase in human suffering. Therefore, it is natural that such events grab the headlines. However, other than for a few days or weeks during which the news dominates headlines, they rarely have much of a direct market impact. This is because many geopolitical events are centred in countries and regions with little or no financial markets and small economies that are not well plugged-in to the rest of the world. Whilst there is always a small probability that such events expand into something more meaningful for markets, the impact on the rest of the world is typically well contained. 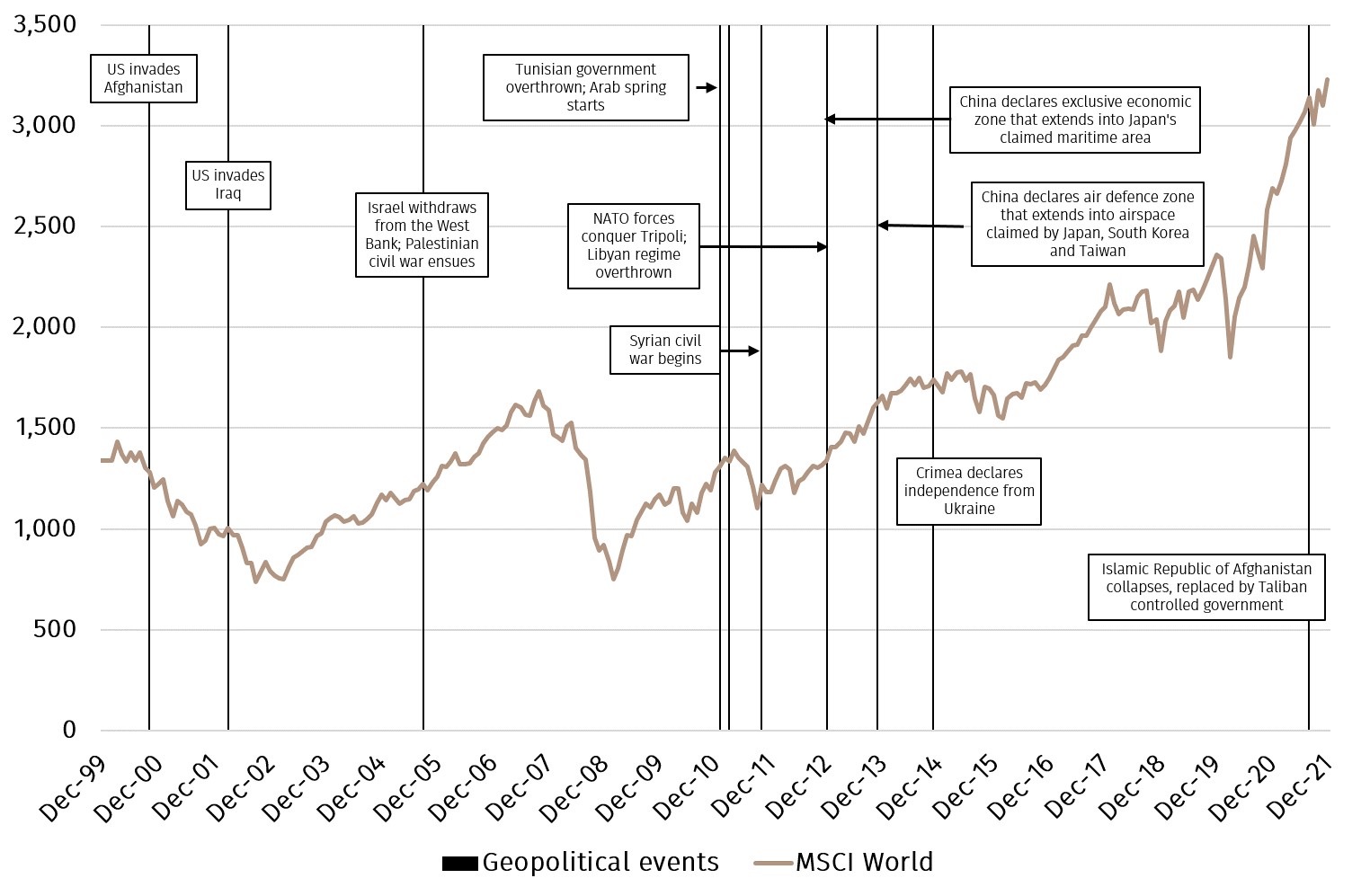 The recent pullback in equity markets can be viewed as part of the natural ebb and flow of investor sentiment rather than anything more sinister. Having experienced such strong markets over recent years and notably since the Covid-crisis lows in Q1 2020, it is therefore natural to have expected a meaningful decline in markets at some point. The major catalyst in this instance is a shift in Fed policy to a more hawkish stance than previously anticipated. History suggests it can take a few months for markets to digest such shifts but that they are not necessarily a negative for markets 6-12 months down the line.

It is important to consider several factors in this context. The economic growth outlook remains robust, there is strong support for corporate profits, the yield curve is positively sloped and there is ample global monetary policy accommodation. That is not to say that recent volatility will not continue for a while – given the strong run up in asset prices over the past 18 – 24 months it is natural to expect occasional periods of consolidation and we believe that is what we are currently experiencing. However, unless there are signs of corporate stress starting to spread through the global economy more generally, we would expect markets to regain their composure. Nonetheless, given recent uncertainty over factors such as the Omicron Covid strain, geopolitical tensions and the shifting sands of global monetary policy, we remain alert to any indications that we need to revisit our view.

US CPI Inflation: volatility and weights

At long last, the US inflation rate appears to have peaked, but at a much higher rate and much later than anticipated. Why have these large forecasting errors been made and what now is the outlook for inflation? In this Macro Flash Note, EFG chief economist Stefan Gerlach looks at these issues.

At the helm: Boris Herrmann and Giorgio Pradelli discuss sailing, business and life

In the 3rd edition of ‘Caminada. Das Magazin’, Andreas Caminada’s lifestyle magazine, published last week, there was very special feature. When extreme sailor Boris Herrmann met Giorgio Pradelli, EFG International CEO at Monaco Ocean Week recently, they had much to discuss. Both are at the helm of sport and business, worlds which have many parallels, and passionate about sailing. The conversation explored their shared values and the enduring allure of the sea, then touched on everything from sailing solo around the world, to the importance of preserving ocean health and protecting our climate.

Is the UK at risk of recession?

The Bank of England recently updated its growth projections in its May monetary policy report, forecasting a contraction in GDP in 2023. In this Macro Flash Note, Sam Jochim looks at the uncertainty surrounding these projections and the main headwinds facing the UK economy.