In this Macro Flash Note, Economist Joaquin Thul looks at the Bank of England’s (BoE) decision to raise interest rates by 0.25%.

On Thursday the BoE raised interest rates by 0.25% to 1.25%. This represented the fifth consecutive rate hike since December 2021. The statement released by the Monetary Policy Committee (MPC) following the meeting showed the BoE maintained a hawkish tone, leaving the door ajar for more and larger rate increases in the coming months.

The BoE decided not to follow the steps from the US Federal Reserve and the Swiss National Bank which earlier in the week had announced larger-than-expected interest rate increases. Instead, it chose to stick to its gradual approach to fight inflation, which is expected to peak at 11% YoY in October before slowing by the end of Q4-22.1

The explanation for the less aggressive action from the BoE relies on their expectations of a weak performance of the UK economy in the coming months. In Q1-22 GDP increased by 0.8% QoQ, below BoE’s expectations from the May Monetary Policy report. Despite the fall in business investment of 0.5% QoQ in Q1, household consumption increased by 0.4% and government expenditure grew by 1.5%.

However, figures for the first month of Q2-22 show a larger-than-expected deceleration of the UK economy, as April GDP fell by 0.3%, driven by a decline in government services output.2 As a result, the BoE now expects UK GDP to decline in Q2 by 0.3% QoQ. This represents a downgrade from the 0.1% growth that was projected in May for the quarter. The Composite PMI index declined for the third consecutive month to 53.1 in May although it remains above the 50 threshold that separates growth from contraction, see Chart 1. 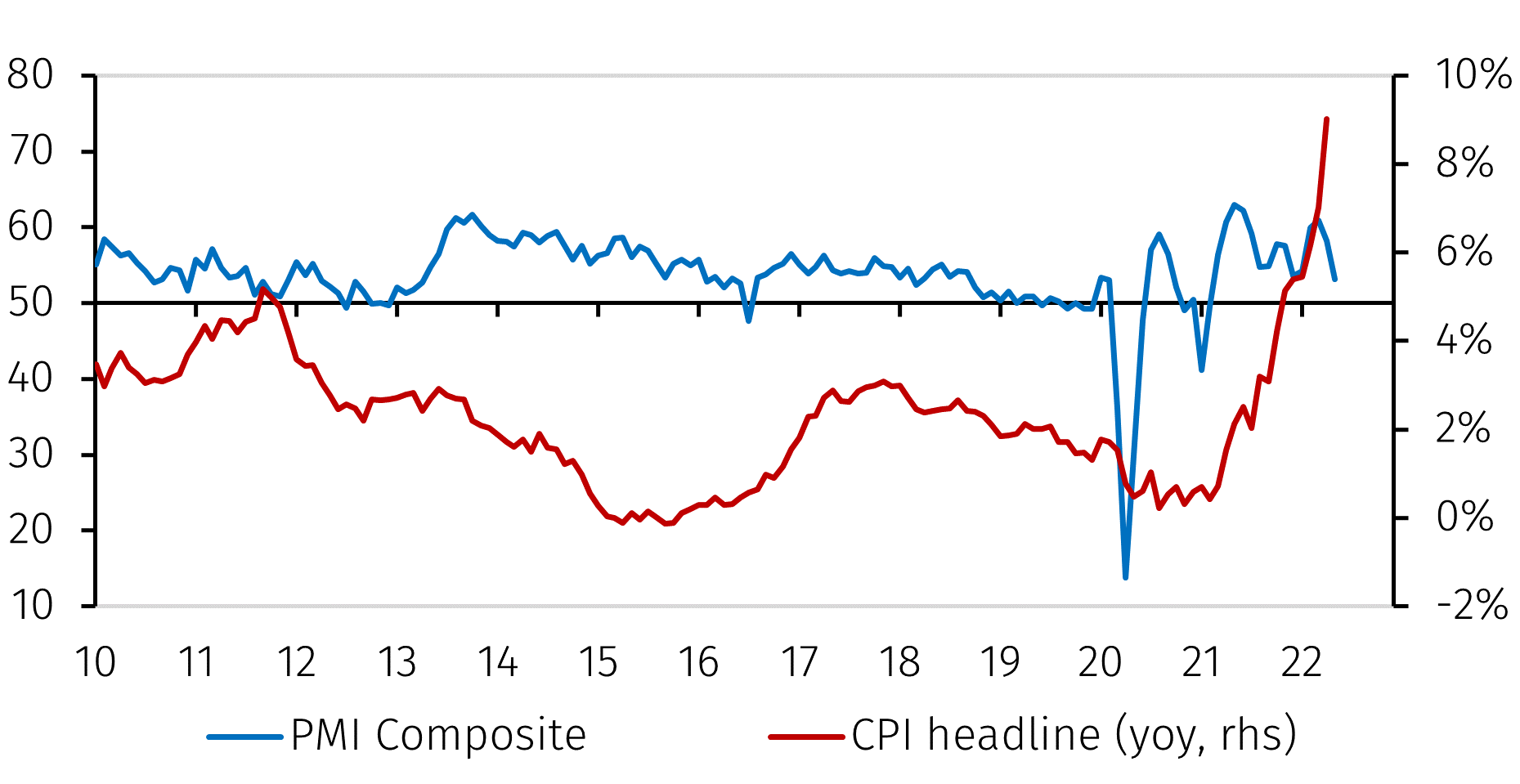 According to the MPC, the slowdown in growth expected for Q2-22 reflects the effects of temporary factors affecting the UK economy, such as the additional bank holiday in May and the scale back of the government’s Test and Trace program. Despite this, private demand is projected to remain strong. Although recent consumer confidence surveys show sentiment has worsened due to falling real disposable income, retail sales volumes increased by 1.4% in April. Therefore, members of the MPC have voted against adopting a too aggressive tightening of monetary conditions. Looking into the MPC members voting history, members have become more cautious on their views, with more members advocating for a gradual pace of monetary tightening in the last three meetings, see Table 1. 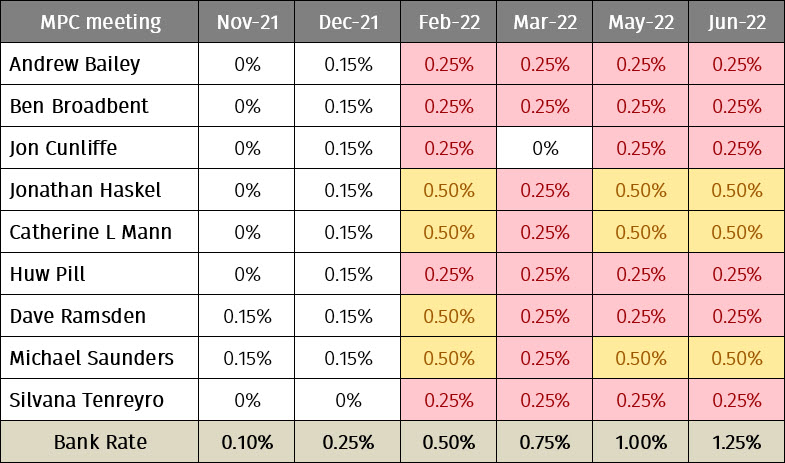 UK equities were down by over 3% after the BoE’s announcement, reflecting the market’s disappointment with the decision. The FTSE100 index is down by over 7% in June but continues to outperform all other developed markets year-to-date, helped by the value characteristics of the UK market. The pound sterling has depreciated against the US dollar by over 2.5% MTD, in line with other developed market currencies. However, given the ongoing political noise and the discussions over changes to the post-Brexit regulatory regime in Northern Ireland, the performance of the currency has been surprisingly resilient.

Overall, the BoE’s strategy seems to be unaffected by recent market developments. MPC members have committed to follow their previous guidance and do not appear reactive to actions from other central banks. However, they risk being too cautious and losing market confidence on their ability to control inflation. The yield on 2-year Gilts rose to 1.93%, ahead of the 3-month rate which increased at a slower pace to 1.51%, see Chart 2. 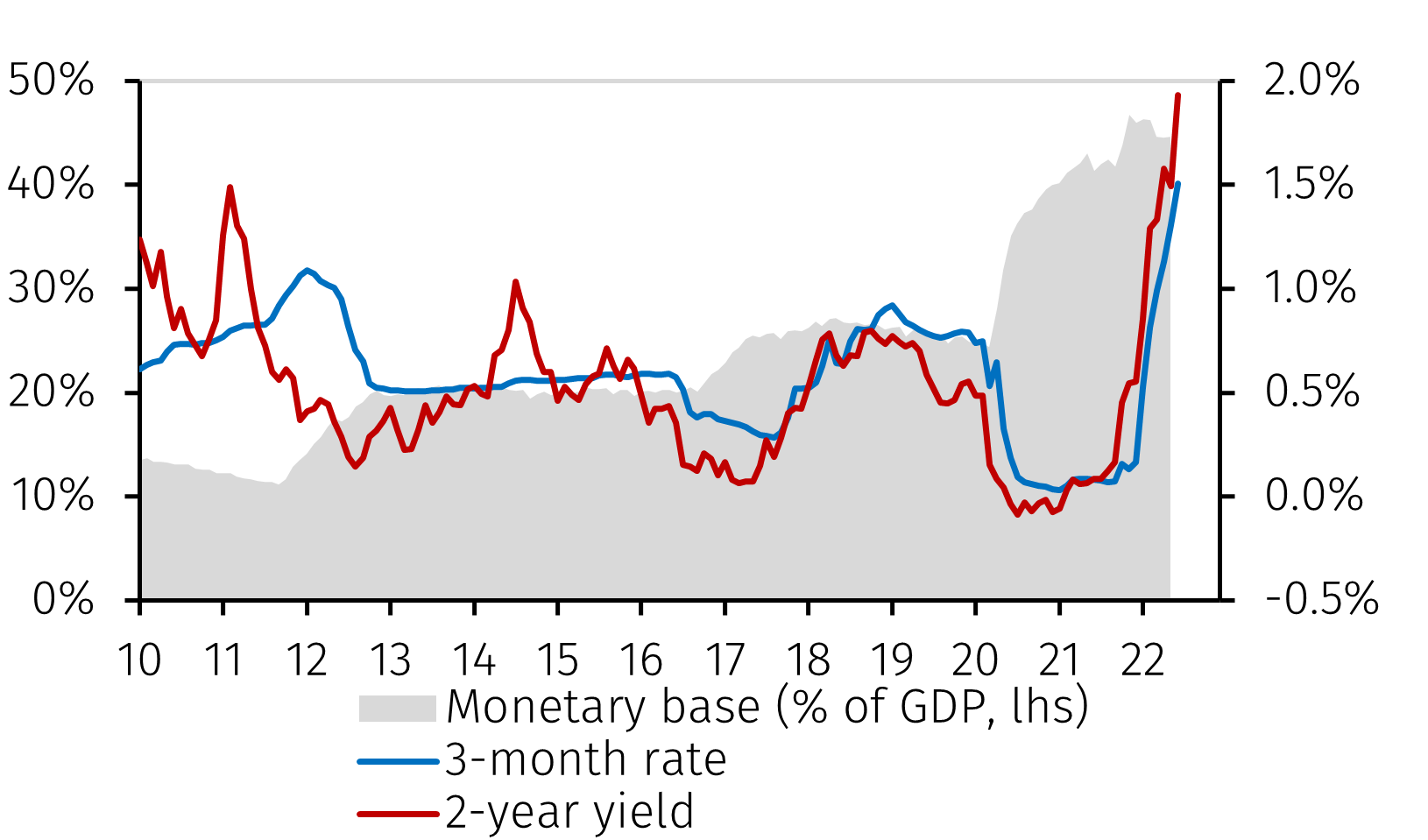 We expect the BoE to deliver another rate increase at the next meeting in August. Depending on the economic data and the cumulative effects of the last five consecutive rate increases on financial conditions, the next move could be of a larger magnitude. Economic conditions in the UK have worsened and this warrants close monitoring. For the time being, the BoE continues to thread carefully between trying not to impose too tight monetary conditions that could push the economy into recession and fulfilling their mandate of bringing inflation back towards the 2% target in the medium term.

1 Different from other central banks, the BoE acknowledged that despite the external factors contributing to a rise in inflation there are a series of domestic factors, such as the tight labour market and the pricing strategies of firms, which are also contributing to the persistence of inflation.
2 UK Office for National Statistics