OPEC+: too little, too late?

OPEC+: too little, too late?

In early June, OPEC+ announced a higher-than-expected increase in oil supply. However, energy prices continue to rise. In this Macro Flash Note, Gianluigi Mandruzzato looks at the reasons behind the increase in prices and the factors that will influence performance in the coming months.

The OPEC+ meeting at the beginning of June closed with a greater increase in production than in previous months. However, the move was insufficient to quell tensions in the oil market as hoped for by the consuming countries.

This probably reflects the fact that at the same time as the OPEC+ meeting, the EU Commission approved a sixth package of sanctions against Russia, including a ban on member countries from buying about 90% of the petroleum products normally supplied by Russia. The ban, which will fully come into force after a transitional phase in early 2023, covers almost 3.5 million barrels per day of crude oil and refined products, a quantity that is difficult to replace in the short term despite the new commitment of OPEC+.

To make the situation worse, OPEC+ countries have shown in recent months that they are unable to meet existing production targets let alone higher ones - the production shortfall in May is estimated to have been just under 3 million barrels. There are fears that the situation may continue to worsen following the EU sanctions against Russia and the lack of investment in oil production capabilities in recent years.

In addition to EU sanctions, the rise in oil prices in recent days also reflects the easing of anti-Covid measures in China. The demand for crude oil is expected to increase in coming months, making the market even tighter.

In fact, the supply of oil remains rather limited. It would be good if OPEC countries were able to get closer to their production targets, but this seems difficult to achieve, especially in the short term. Other producers, such as in America, could increase production more than they have already done in recent months. However, because the world is transitioning away from fossil fuels, there is less incentive for oil producers to invest in future production. 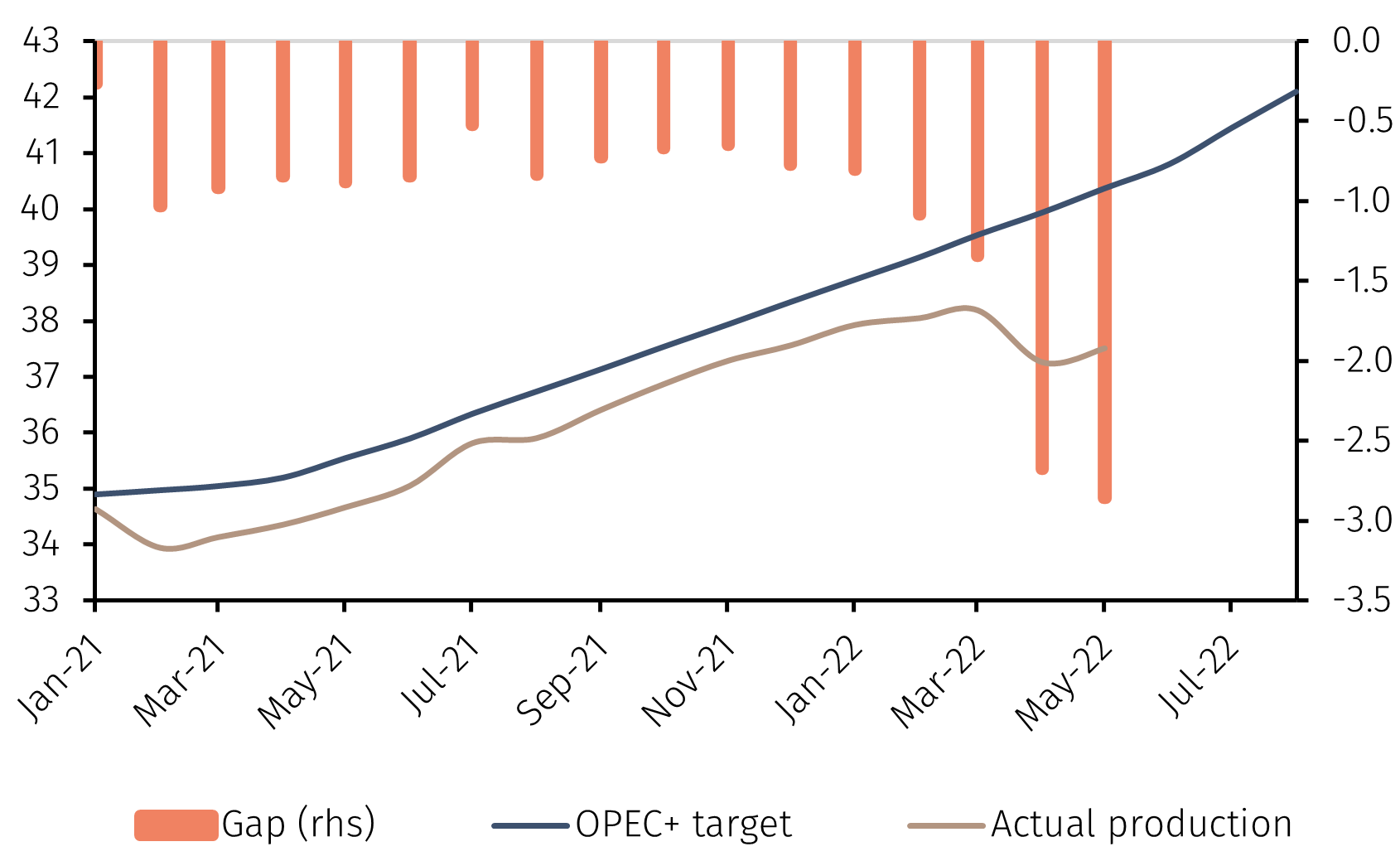 Other options being considered include easing sanctions on oil exports from Iran and Venezuela, as recently granted to European companies. These measures could encourage a drop in crude prices in the medium term, but the immediate impact will likely be limited. The reason is that in both countries production capacity has been significantly reduced in recent years, precisely because of the success of sanctions in limiting oil sector investment in those countries. So, even in the presence of large oil inventories that could be put on the market, especially from Iran, the impact on prices will be modest in the short term.

It is interesting to note that the increase in the oil price in recent weeks has closely followed the price projections made at the beginning of March in which it was assumed that there would be a sharp drop in Russian supply following retaliation by Western countries.2 It is also important to note that markets expect prices to drop in coming months. If prices were to remain higher than expected, the risks to inflation would be evident. 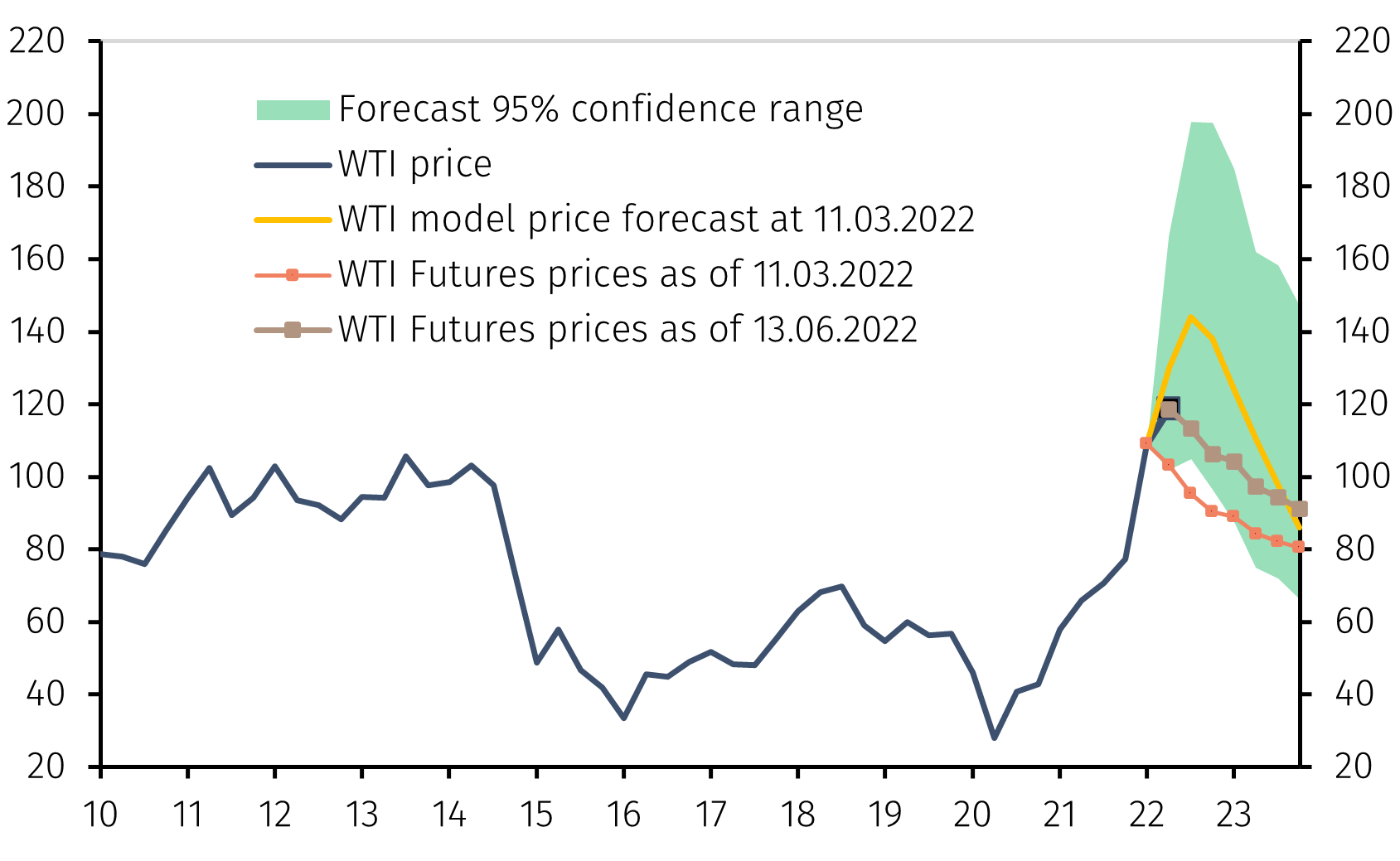 Another factor supporting high energy prices in coming months relates to developments in the natural gas market. Even in the United States, inventories are much lower than the seasonal average due to increased demand, including exports of LNG to Europe to replace Russian gas. The price has thus risen to around USD9.5 per million British Thermal Unit (BTU), the highest since 2008, which will increase upcoming heating and electricity bills for households and businesses.

Finally, we note that the increase in refining margins, or crack spreads, must be considered. In addition to oil and natural gas, Russia was also a major exporter of refined petroleum products, including gasoline and diesel. The increased demand for distilled products after the invasion of Ukraine clashed with the limited spare capacity available to Western refiners, increasing the refining margin and, therefore, the prices of final products. It is estimated that the impact of increased crack spreads on the price of gasoline in the US is equivalent to a crude oil price shock of about USD25 per barrel. Inevitably, high energy prices push up consumer prices across the economy as revealed in the May CPI. 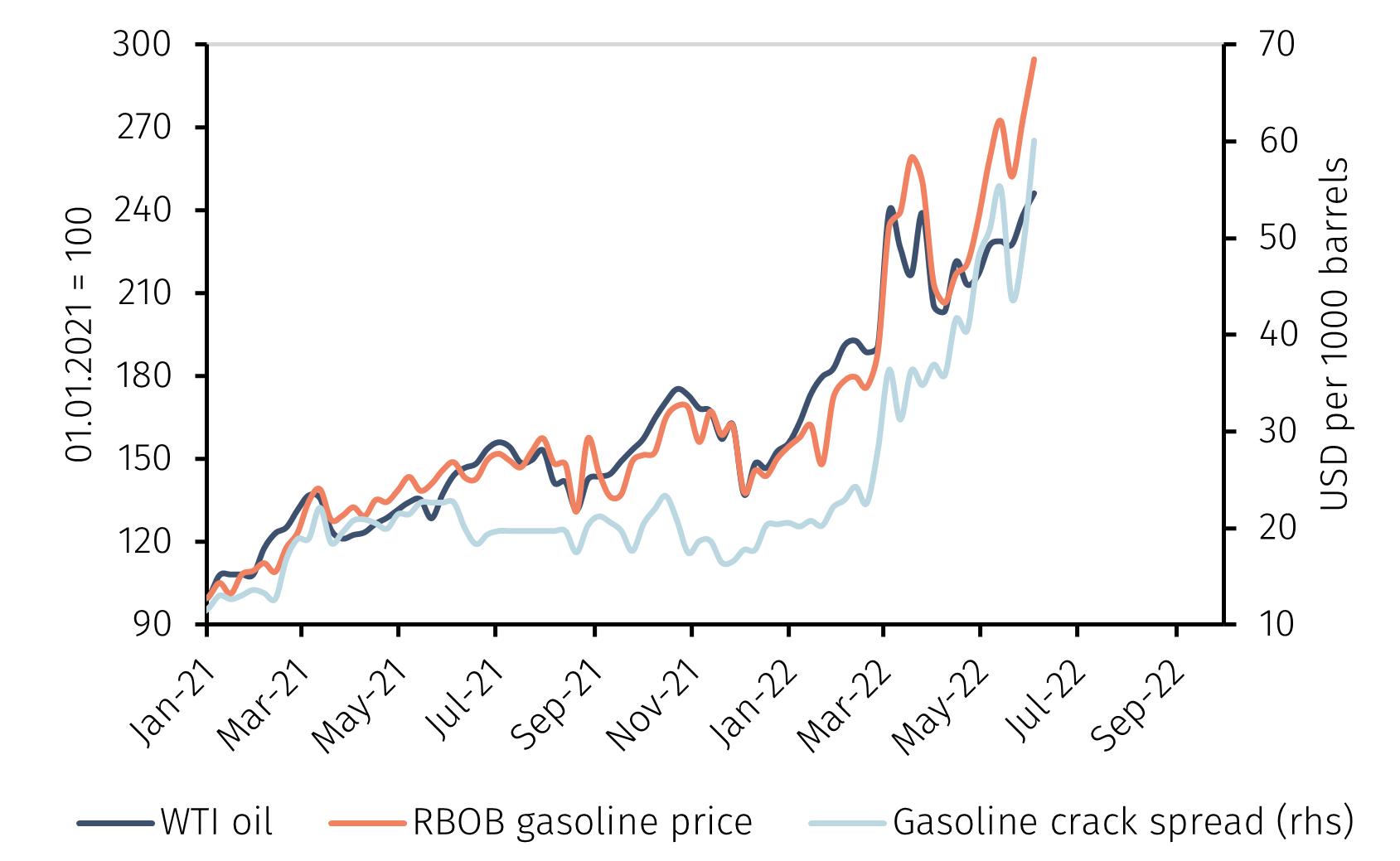 In conclusion, although the decision by OPEC+ to increase production in July and August more than in recent months is welcome, it is probably too little and too late to calm energy markets. This represents a risk to the world economy, both because inflation will be higher, forcing central banks to tighten monetary policy, and also because high energy prices act like a tax on purchasing power, reducing GDP growth.

1 The “EU Save Energy Communication” details short-term savings worth up to 5% of EU petroleum products consumption, equivalent to about 0.6 million barrels per day; see http://go.pardot.com/e/931253/--uri-CELEX52022DC0240-from-EN/vtj5/65433895?h=lWEb2XccD1OcjPpNC2TICVG-ZvBM-OO6bbGmK4T4Aj4
2 As for the price outlook, it is interesting to note that analysis recently published by the European Central Bank concludes that about USD 25-30 of the current price reflects the risk premium demanded by market participants. The risk premium rose after the invasion of Ukraine, and it is hard to imagine it can rapidly ease.