Following a strong recovery from the pandemic in 2021 (see Table 1), the growth outlook appeared to be broadly favourable for 2022 and 2023. Taking the December 2021 projection from the OECD and the January 2022 projections from the IMF and World Bank, annual global growth was expected between 4.1% and 4.5% in 2022. 1 2 3 Since then, in its April 2022 World Economic Outlook, the IMF downgraded 2022 global growth projection by 0.8 percentage points to 3.6% - as discussed in a previous Macro Flash Note.4 The World Bank and OECD have now followed suit, downgrading their respective global growth forecasts for 2022 to around 3%.

The World Bank and OECD explain the downgrades to growth projections with two main factors. Firstly, Russia’s invasion of Ukraine, and secondly, China’s zero-Covid policy. The negative spillovers resulting from these shocks to the global economy are exacerbating pre-existing strains which emerged throughout the pandemic and during the recovery.

Perhaps the most important channel through which Russia’s invasion of Ukraine is impacting global growth is higher commodity prices. This has pushed inflation to a level higher than previously expected, leading to a faster pace of monetary tightening than had previously been accounted for in both the World Bank and OECD forecasts.

In a similar vein, China’s zero-Covid policy is also dampening the global growth outlook. Lockdowns in the first half of 2022, aimed at curbing Covid outbreaks, have resulted in key manufacturing cities and ports having subdued output. Combined with the war in Ukraine, which has made parts of the Black Sea inaccessible, this has heightened supply chain bottlenecks.

One of the most notable points from both the World Bank and OECD’s updated growth projections is the lack of upgrades to the outlook for 2023. Given the negative shocks impacting this year’s projections, a rebound may have been expected. Instead, growth is expected to remain around 3% in 2023. The underwhelming projected response by the global economy to the negative shocks in 2022 is a result of two main factors. The World Bank and OECD share the view that there will be a further unwinding of fiscal and monetary support which was provided during the pandemic. Furthermore, both organisations also factor in the lingering effects of the war into their projections. This is particularly true for the OECD, which incorporates an EU embargo of seaborne oil imports from Russia into its 2023 projections.

Figure 1 illustrates the World Bank’s projected impact of the war on global growth. Compared to January’s forecasts in which Russia and Ukraine contributed to global growth, they are now projected to detract from it. According to the World Bank, emerging markets such as Brazil and South Africa are still expected to grow by the same amount as in the January projections.

Both organisations also highlighted an elevated level of downside risk to the outlook. These could materialise in the form of a new wave of Covid leading to further lockdowns in China, an escalation of the war in Ukraine, or sanctions on Russia becoming more extreme. The OECD performed a scenario analysis of a complete European embargo on Russian gas, with the projected impact on growth in 2022 and 2023 shown in Figure 2. 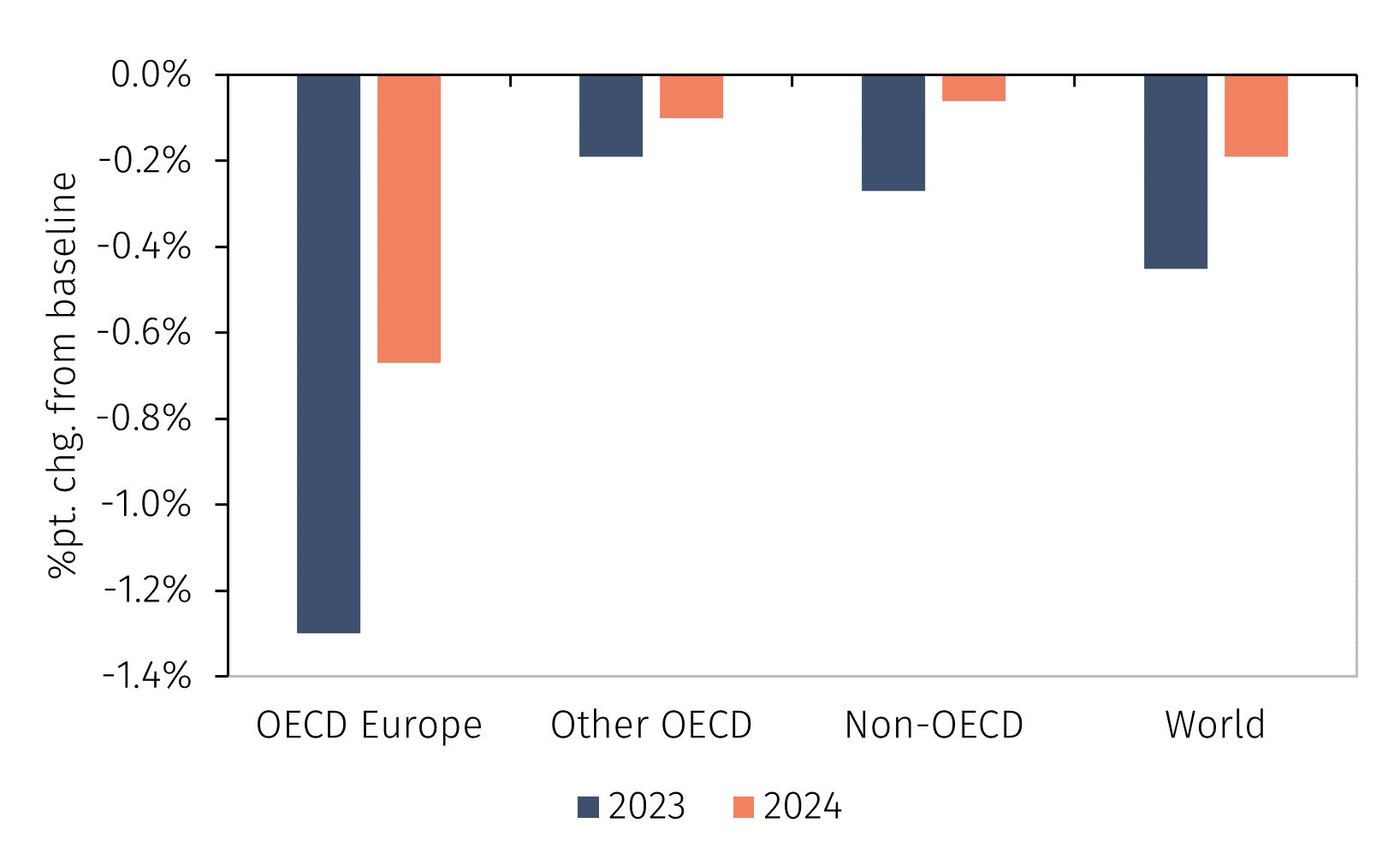 Given the consistency of the World Bank and OECD in their downgrades to growth projections, it is important to provide some context to the outlook. In the case that there are no further downgrades to growth throughout the year and the projections are realised at the end of the forecasting period, global growth would be broadly in line with its post-GFC and pre-Covid average (see Figure 3). This highlights the fact that although growth projections have been downgraded, they have come from a starting point which was above average. 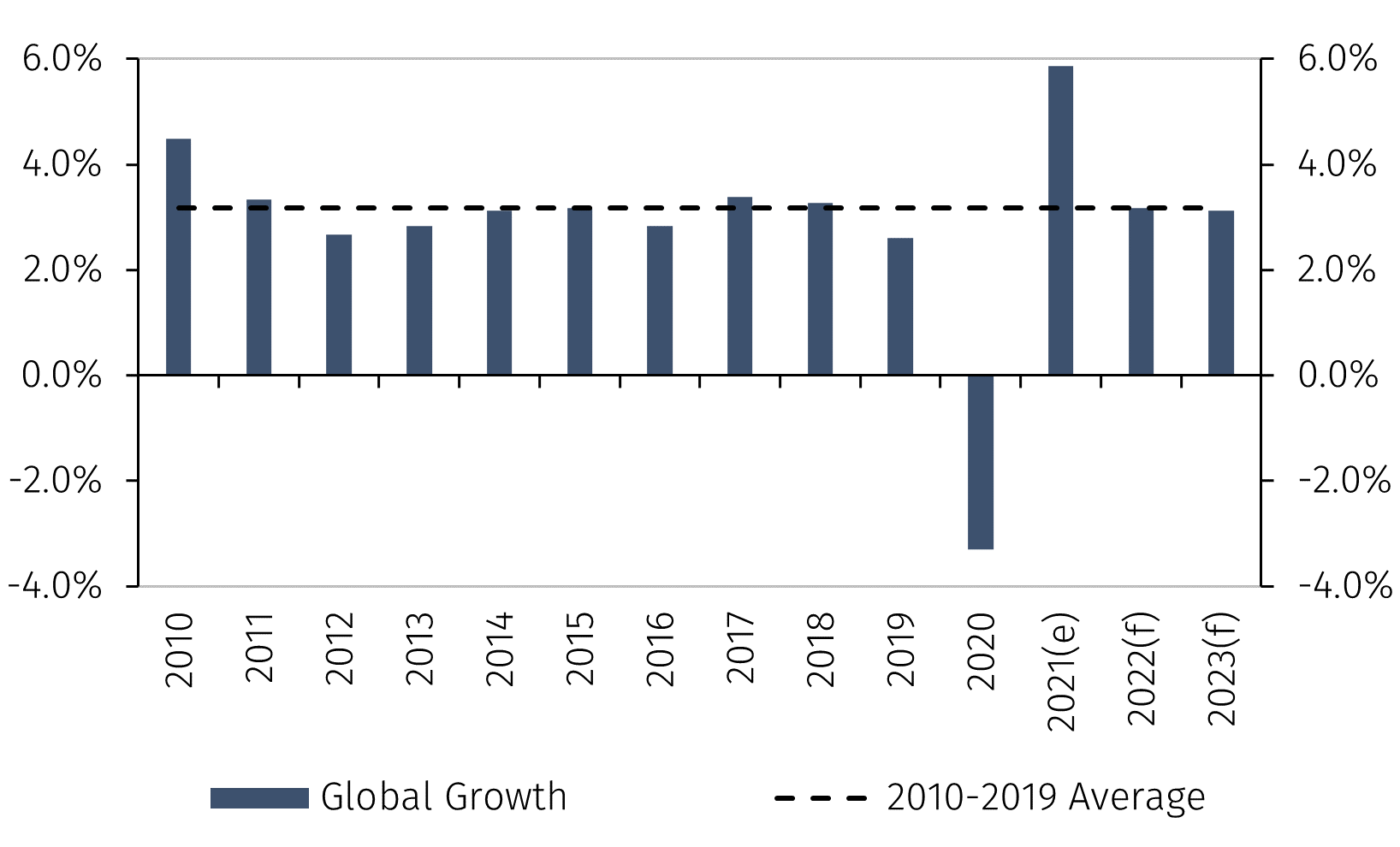 In summary, both the World Bank and OECD have downgraded growth projections for many economies due to the impacts of the war in Ukraine and lockdowns in China. Despite this, growth is expected to remain broadly in line with its long-run average. There are significant risks to the outlook, however, which could see a further slowdown in the global economy compared to the level currently expected.

In this Macro Flash Note, Economist Joaquin Thul looks at the Bank of England’s (BoE) decision to raise interest rates by 0.25%.