Choice of interest rate spread
There is no theoretical reason for selecting a specific interest rate spread. Not surprisingly, the choice differs between observers. Market commentators generally focus on the spread between 10-year and 2-year yields whereas the Fed focuses on the spread between 10-year and 3-month yields, arguing that it has stronger predictive power.

Plotting the two yield spreads, they are very strongly correlated with each other and with the growth rate of real GDP over the next four quarters. It seems plausible that it might not matter much which spread is used.

Spreads and future real GDP growth
To explore the information contained in the slope of the term structure, some forecasting equations are estimated on data over the period Q1 1962 – Q4 2020. We first ask how well current spreads forecast real GDP 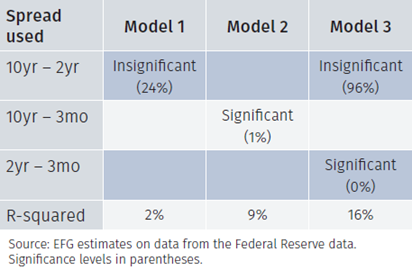 In the first model we use the 10yr – 2yr spread. Surprisingly, given that the literature finds this spread is useful for forecasting recessions, the statistical relationship between the two variables is insignificant (that is, the correlation is so low that the observed relationship could be due to chance). The fraction of the variance of real GDP growth accounted for by the spread (the 'R-squared') in this model is 2% and thus almost zero.

In Model 2, the 10yr – 3mo spread is used. The results show that it is highly significant, as evidenced by the significance level of 1%. While the R-squared is much higher, 9%, it is still the case that the forecasting power of the spread is limited.

Non-linearities
The finding that the 10yr – 2yr spread does not forecast future real GDP growth is surprising, given the evidence that the spread forecasts recessions. One possibility is that the relationship is non-linear. It could be that an inverted term structure indicates that future growth with be below average but that a steeply upward-sloping term structure does not signal above average future growth.

Conclusions
What does this model, which summarises the historical behaviour over the last 60 years, predict for the coming four quarters? Looking at current data, the 2yr – 3mo spread indicates a growth rate of 4.1%.6 This is very high – the median projection of the FOMC members is for 2.8% growth in 2022. It should be kept in mind that this is a point forecast and that the margin of uncertainty is high.

Download the full edition of our Infocus publication here.

US inflation: Past the peak, but then what?

US inflation appears finally to have peaked, but how quickly will it decline in coming months? Commodity prices remain high and global supply chain bottlenecks are still evident. Here four factors on the inflation outlook are analysed.

How fast will the FOMC raise interest rates?

With CPI inflation in the US exceeding 8% year-on-year in March and with interest rates at 0.25%-0.5% the Federal Reserve is in a tightening mode, having first hiked rates by 25bps on 16 March. But how fast might it raise interest rates from here? To address this question, it is useful to review how the Fed has behaved in past tightening episodes.