Despite raising rates by an unprecedented 0.75% to 0.50%, the Swiss National Bank (SNB) sent a surprisingly dovish signal to markets. While other central banks, including the US Federal Reserve and the European Central Bank, are keen to indicate that they will continue to increase rates forcefully to counter high inflation, the SNB only reiterated that further rate increases “cannot be ruled out”. Hence, although another rate increase before the end of 2022 remains possible, it is not certain that it will happen and that it will be by another 0.75% as markets expect (see Figure 1).

In fact, the SNB set a high bar for new, aggressive rate increases. The new SNB conditional forecast sees quarterly inflation at 3.4% year-on-year until the first quarter of 2023. Inflation is then expected to decline to 1.6% in early 2024 before rising again towards 2% in mid-2025. So, unless inflation exceeds the short-term forecasts, the SNB could conclude at its December meeting that the policy rate needs only a small increase to ensure that inflation falls back and stays within the 0-2% target range in the medium term.

Potential SNB caution rests on good reasons. As explained in the monetary policy assessment, current high inflation mainly reflects exogenous shocks to energy and food prices that are beyond the influence monetary policy. With the increase in interest rates, the SNB aims to prevent the spread of inflationary pressures to other goods and services. It is encouraging that Swiss producer price inflation has recently declined because of weaker commodity prices (see Figure 2). If these trends persist, the high correlation between Swiss producer and consumer prices suggests that CPI inflation will fall in 2023.1 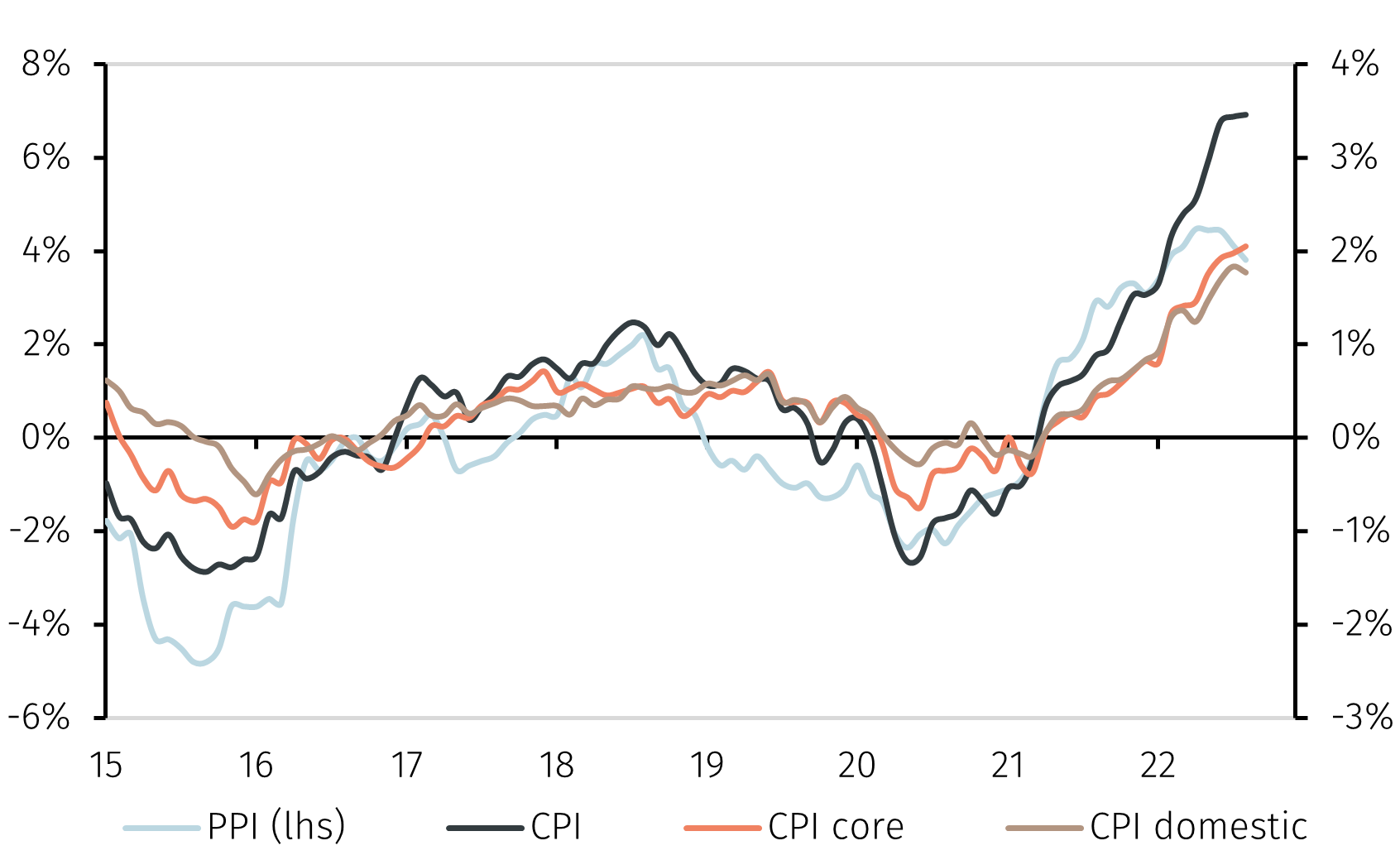 Furthermore, the SNB noted that the global economy has slowed “considerably”, representing a downside risk to growth in a small open economy like Switzerland (see Figure 3). The downside risks to growth are exacerbated by the preannounced policy tightening by central banks around the globe.

In addition, weaker global demand will help to ease supply chain bottlenecks that have pushed prices higher following the reopening of the global economy after the pandemic.

Finally, the strength of the Swiss franc supports the SNB’s cautious approach. Since mid-June, the trade weighted exchange rate of the franc has risen by more than 5% even after the selloff that followed last week decision. Furthermore, the fundamentals continue to support a rise of the Swiss franc vis-à-vis the other major currencies in the longer run, and that would help to contain inflation in Switzerland.

To conclude, markets expected the SNB to frontload its monetary policy normalisation in September given the expected tightening by other central banks before the next SNB meeting in December. The dovish surprise was best seen in the fall of the Swiss franc that followed the announcement, although it was short-lived at least against the euro. Markets continue to anticipate the SNB will raise rates by another 0.75% by the end of the year, but this is by no means certain.

As President Jordan noted in Jackson Hole, central banks should consider the risk of overtightening, potentially leading to the return of too low inflation, if not deflation.

The 4th edition of ‘Caminada. Das Magazin’ hits the shelves today, Friday 18 November 2022. The new edition blends the latest food trends with some cultural inspiration from across Europe, as well featuring exclusive interviews and the latest influences in design and lifestyle.

The final result of the US mid-term elections is still uncertain, but some trends are already visible. In this Macro Flash Note, GianLuigi Mandruzzato looks at the key conclusions for the economy and the markets.

The price of diesel has soared since the invasion of Ukraine, diverging from other petroleum products. While the markets are confident that the recent drop in oil prices will help lower inflation, the high price of diesel is slowing this process. GianLuigi Mandruzzato looks at the price drivers of diesel and its impact on the prices of other goods and services.